Stuck in a Sketch 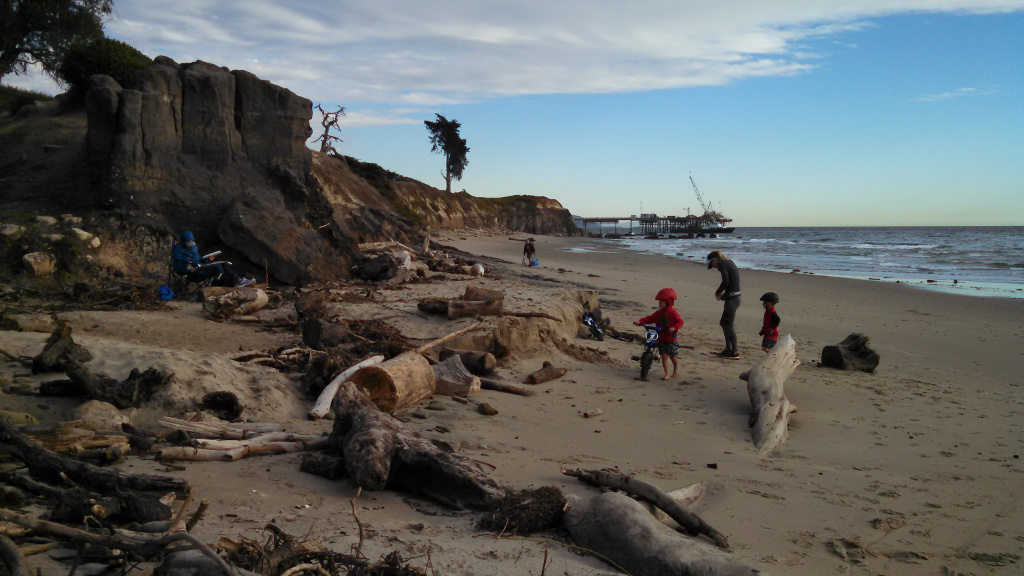 Of course my vantage point was the best, with a view of the pier with loading crane, and the dramatic rocks in the foreground, with the waves breaking on the sweeping curve of wet sand. Funny how everyone else had set up their easels looking other directions, to boring views of the ocean with the Catalina Islands in the distance and the off-shore oil platforms. What were they thinking?

Feeling on top of the game, it was easy to dive into a sketch and skip the instructor's demo. Even though it had been five years since my last watercolor painting experience, my paints were still soft, except for two, a green and a red. My last painting of the Mission and fountain in Santa Barbara had been fairly successful, even if the details were vague in my memory.

My plan was to make a quick sketch to block out the shapes and values, and maybe choose my focal point and simplify the scene. Then after transferring that sketch to my watercolor paper the actual painting could begin. By skipping the demo, my painting should be under way by the time the other students got their paints out.

The sketch turned out to be just as big a challenge as the painting. My first attempt focused on the rocks in the foreground and they wound up way too big, crowding the pier and crane out of the picture frame. The curves in the vegetation and path up the hill to the side of the rocks took on a crescent shape and seemed to grab attention away from even the rocks. What was going on?

My mind was magnifying certain elements in its own model of the scene, and my drawing reflected the distortions in that model. The goal was to draw what was out there beyond my eyes and brain, not inside my skull. It reminded me of what Professor Evans had said about my drawing of a plaster bust of a Roman senator back in drawing class in my university days: “an interesting caricature”.

Starting over on the backside of the paper, my attention fixed on the horizon line and the boundary between the water and the sand. A few lines indicated where the pier stood, and just some blocks sufficed for the rocks. A few circles and parallel lines suggested the driftwood logs. So far, so good.

Then a funny thing happened. The sketch started taking on a life of its own, with lines connecting and shapes flowing into each other. Erasing here and there, adjusting lines, thinking about light direction and shadow, using hatching to render shadow, the time gradually slipped away. Soon the other students drifted in to find their spots and start their paintings, and my sketch wasn't even finished, let alone transferred to my watercolor paper.

The sketch wouldn't let go, and after a while it became obvious that my painting would be a quick affair if it happened at all. A glance at my sister Sylvia, further up the hill and painting one of those “boring” scenes of the ocean, confirmed that she was well on the way to completing her painting. Well, that was to be expected, since she had been painting outdoors for at least thirty years.

By the time we were ready to leave, my sketch was still just a sketch, and not even a well finished drawing. There were some attempts at rendering volume and shadow, but nothing very definite and certainly not dark enough to define adequate contrast. My rendering of the clouds in the sky was weak and vague, and the actual shapes had long since disappeared. My phone camera had captured a few interesting events in the scene, though. One was a shuttle boat that carried workers to and from the offshore oil platforms docking at the pier, and another was a woman and her two children returning from a walk on the beach to retrieve their bicycles.

My plan, as explained to my sister and the instructor as we were making our parting remarks, was to refer to the photos and work on the painting at home in Sylvia's studio. Maybe the sketch could be simplified when transferred to the watercolor paper. That at least was my way of easing my chagrin over not producing a painting on the spot.

Later that evening, carefully studying some watercolors in a library book Sylvia had checked out of the Ojai public library, it dawned on me how ambitious my scene was for a beginner. It was way too complicated. Maybe the more experienced artists in the class knew that, and deliberately chose simpler subjects, painting the water or the clouds, and not attempting to pack lots of detail and compositional elements into the picture. My task was to start thinking like a painter, not a photographer.