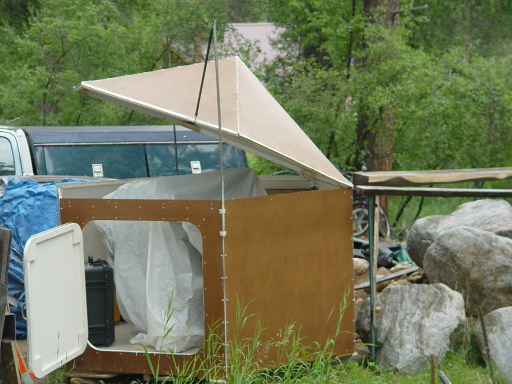 Riding out a 50 mph windstorm in my observatory tent convinced me that for desert camping, a hard-sided structure would be worth the effort.  Inspired by the HexaYurt structures popular at Burning Man, my goal was to create a structure that would be easy to take apart and reassemble when moving from one campsite to the next.  Rather than adhesive tape, machine screws and metal flashing would hold the panels together.  The whole thing would break down into 4 foot panels that could be loaded into the bed of my pickup truck, and leave enough room for my telescope equipment and solar panels.

In daily use it is quick and easy to remove the roof for a night's observing.  The roof remains an integral unit that hinges up on one edge when supported by two poles mounted to the walls on opposite sides.  With one half of the roof suspended in the air, it is easy to single-handedly move the entire roof onto the supporting rails next to the hexagonal base.  The whole operation takes maybe a minute, unless the roof has been screwed down to the base.  Normally, the roof just sits on the base without screws attached, but if you anticipate a wind storm, it only takes maybe 5 minutes to secure it firmly.  During the day, the roof can be left in the tilted position to prevent heat buildup inside the structure, assuming there will be calm weather.  Otherwise, some type of sunshade outside the observatory would control the amount of insolation.

With the roof removed and telescope uncovered, the observatory is open and ready for use.  With the equipment boxes removed, there is plenty of room to move around the telescope.  Note that the tripod extends to the ground through oblong holes cut in the floor.  The tripod sits low to the ground to keep the telescope below the roof line in its parked position when the observatory is closed.  The control computer (not shown) sits underneath the telescope and is controlled via a wireless keyboard and mouse.

This is just one module, but the hexagonal shape permits other modules to be attached and accessed through 3 by 3 foot doors.  My plan is to attach three other modules, a central one with an 8 foot ceiling for cooking, and two satellite modules, one for sleeping and one as a control room.  The control room would house two monitors connected to the observing computer in the telescope module via two long HDMI cables.  This would provide more room for a desk and chair, and with the wireless keyboard and mouse would eliminate the danger of static shocks to the computer, which can cause it to drop the USB connections to the telescope, focuser, and camera.  With the camera and focuser, all images could be monitored as they arrive in the control room.  With an image sequencer, the night's observing plan can be executed via the computer, directing the telescope from one object to the next, allowing the operator to get a decent night's sleep.